An interconnected, efficient and intuitive city that adapts itself to better communities. That’s the promise of a smart city and investors and government officials all over the world are already working hard to make this ‘utopia’ a reality.

Born out of the Smart Growth concept of the 1990s, Smart Cities today deploy a connected infrastructure of electronic and digital technology to transform city living. One such digital technology is digital signage – a key resource for cities, brands and citizens.

These digital displays and interactive touchscreens not only offer benefits visually to the smart cities that deploy them; but they also reshape the relationship between the city and its citizens, creating whole new ways for them to engage.

The Rise Of Digital Signage In Smart Cities

Part of this technological renaissance is digital signage. Already being used today successfully all over the world, digital signs benefit local citizens and visitors with a range of benefits including:

Today, 55% of the world’s population are living in urban areas and cities. As the number of people migrating to cities increases, local governments and businesses are investing heavily into smart city initiatives, aiming to transform their cities into the ‘cities of tomorrow’.

Connection and engagement are two of the biggest fundamentals in smart city development, with the overall goal being to provide a city that connects with its citizens, learning from them and improving city living and wellbeing as a result.

To achieve this, smart cities are investing in hardware, software and network infrastructures that enrich communities and provide relevant information to guide, update and connect with them.

Smart Cities succeed or fail based on their infrastructure and their ability to incorporate people into their systems and processes. The most valuable resource in any urban environment is its citizens, therefore, developing new ways to engage with them is crucial for governments and brands alike.

Alongside engagement, there is also a huge importance on connectivity, something Smart Cities achieve through an integrated and connected ‘internet of things’. A connected smart city enables an open flow of data and information, allowing the city to constantly optimise its service offerings and develop city living.

This is where Digital Signage comes in. By combining the concepts of Connect & Engage, these digital signs can provide data to both the city and its people through a shared network. Consider a city in which a digital sign uses facial recognition technology to provide a bespoke suite of information to the user, including relevant commute updates to them, weather announcements and local news that would matter to them.

The possibilities of smart digital signs have only just begun to be explored. They enable cities to deliver contextual and personalised information to their communities and provide benefits to all parties.

The Benefits Of Digital Signage In Smart Cities

Smart solutions and technologies are so readily sought after because of the benefits they provide to both the end-user and the investor. This is also true for digital signage and even offers added benefits to brands and advertisers:

Benefits Of Digital Signs For The City

The most obvious benefit to the city is the revenue that can be generated from selling ad space. The development of a smart city is no small feat and can demand heavy investment to be funded to completion. Ad space sold through these digital signs can help alleviate this capital demand and in some cases even generate profit for the city.

Most notably is LinkNYC’s network, which provides Wi-Fi, wayfinding and charging stations to the user. The whole project is funded by ad revenue and has generated hundreds of millions for New York City to date.

Beyond this, digital signs promote cities through their bright and engaging displays, elevating the aesthetic of the urban areas that use them. Just think of Times Square!

Digital screens reach an incredibly large audience each and every day. By combining the power of digital signage and smart data, advertisers can reach their target audiences with effective messaging developed from data driven learning.

Dynamic campaigns with ever-changing messaging allows them to target focus groups. DOOH (Digital Out-Of-Home) advertising is on the rise, with the market slated to reach $5.6 billion in by 2026.

THINGS WE LOVE AT PAVEGEN:

Soofa Digital are pioneers in the digital out-of-home advertising market, offering advertisers a new way to buy outdoor ad space. They offer ad space based on a brands needs and reach exclusive audiences by advertising in highly congested spaces.

They allow a brand to promote themselves alongside hyperlocal content that people are already checking every day and provide an extra level of data to brands with data, allowing them to measure ROI reach accurately. We personally love seeing what they’re doing, did we mention they’re fully solar-powered? 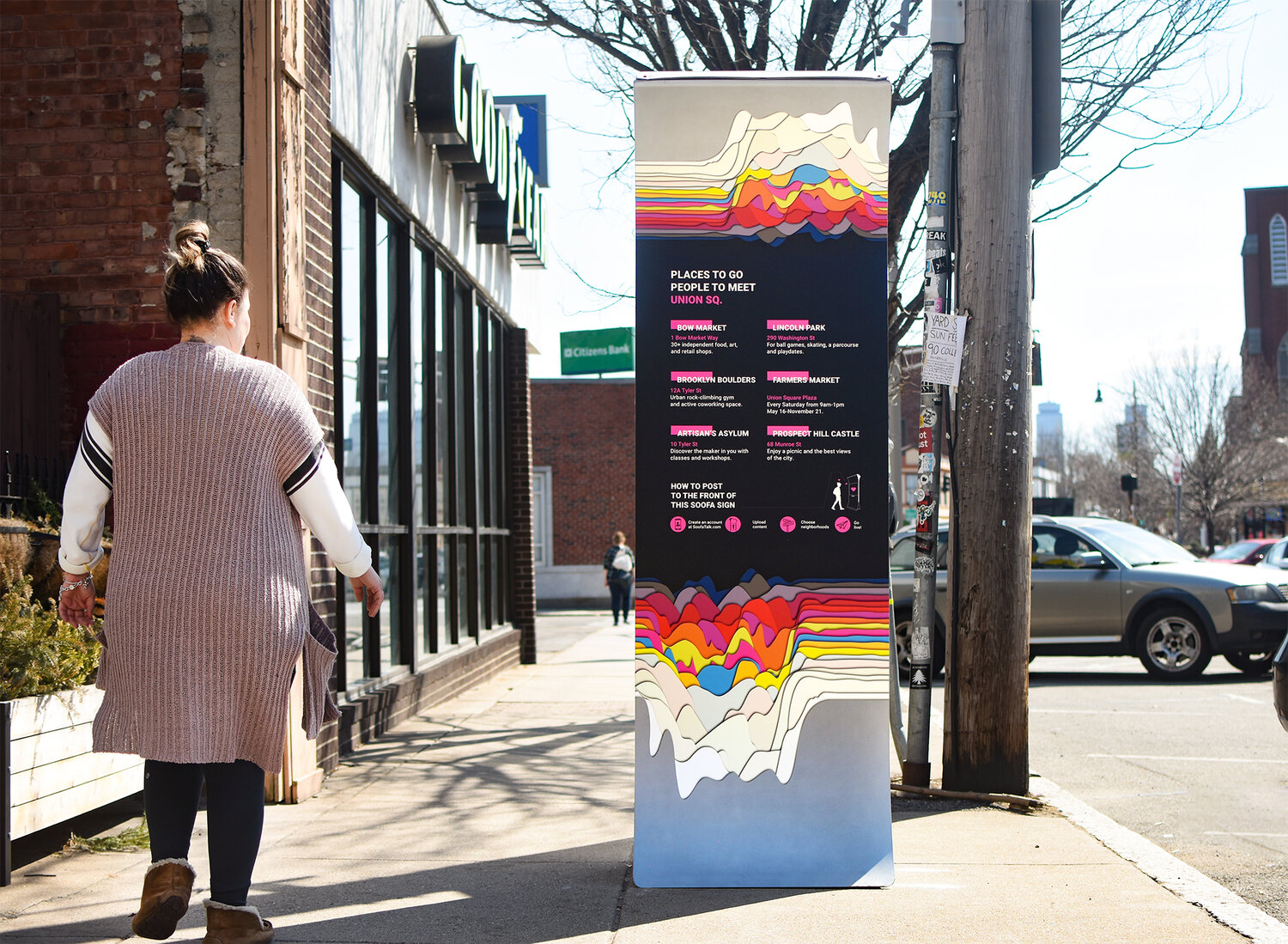 Benefits Of Digital Signs For Communities

At the end of the day, a smart city is always about one thing: people. Digital signage, and the wider engagement and connectivity ideologies they belong to, offer consumers relevant information that is always contextual and provides some benefit to them personally.

The highlight here is information. By providing people with new ways of receiving important updates, alerts and information about their city, smart cities are providing communities with new levels of engagement and connectivity.

As Smart Cities and the technology they implement continue to develop Digital Signage is only going to become more valuable to both smart city officials and the communities that interact with them.

By deploying digital technology that connects and engages with the public, smart cities can not only increase happiness in cities but also enrich communities and offer until-now-unforeseen levels of access to information.

Pavegen’s award-winning kinetic technology uses the renewable energy generated by a footstep to help power interactive applications, such as information screens, lighting, green walls, phone charging and game pods. The experiences we build in smart cities are designed to educate and engage stakeholders and citizens in their communities.